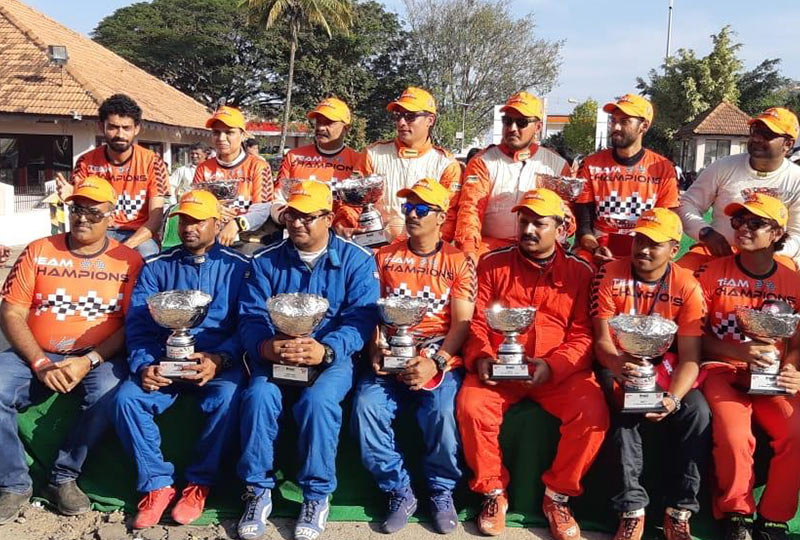 Team Champions have been turning heads since their debut at the South India rally 2018 earlier this year. The private team run by Champions group, is set to become the largest team in the history of the Indian National Rally Championship.

Team Champions bagged top honours in three classes including INRC3 with overall seven podiums in the Indian National Rally Championship (INRC) Round 4 and the supporting races of FMSCI Cup, which concluded here on Sunday.

Making their presence felt in every category, Team Champions which entered the Indian rally scene in a big way supporting 14 teams in 2018, earned three third places in the top three categories besides winning all the other three classes in the Round 4 Coffee Day Rally. Competing against the top names of Indian rallying Bopaiah and co-driver Gagan Karumbaiah finished a creditable third behind Karna Kadur (Nikhil Pai) and Amittrajit Ghosh (Ashwin Naik) in the overall classification. Michu Ganapathy with co-driver Venu Ramesh Kumar came third behind another two giants Amittrajit Ghosh and Gaurav Gill, who finished first and second in the INRC1 class.

Arjun Rao ably navigated by Milen George won the INRC3 in the national championship round clocking the best time in his Volkswagen Polo which was tuned by Chettinad Sporting and backed by Team Champions.

"With the aim of bringing in more drivers and making them champions, we are glad to have won all the three lower categories. At the same time, the talent and dedication shown by our drivers and tuners reaped in a bounty bringing in three podiums in the top classes. There is a champion in everyone and Team Champions strives to realize that potential," said Subhakar Rao, Chairman of Champions Group.

Vamsi, CEO and Director, who is heading the Motorsports Division said: "It is a team effort and the dedication of the drivers, co-drivers, support teams and tuners have brought in admirable results. Our focus ahead is to bring in and hone more champions to showcase their exceptional talent."