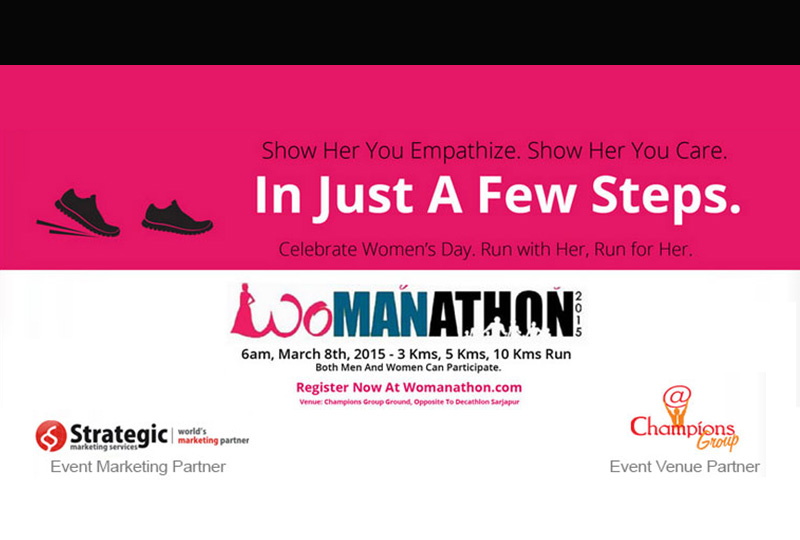 Bangalore 05/03/2015: Bangalore is all set to witness the first ever Womanathon on the occasion of International Women's Daythis March 8th, 2015 at the Champions Group Grounds, Sarjapur Road. The event is set to be held across 3 cities, Bangalore, Hyderabad and Chennai simultaneously. As part of this marathon men will run for women as a mark of their respect and as a protest towards violence against women. The proceeds of the event will be contributed towards women and girls from the deserving community. The main sponsors of the event include St. Britto's College of Logistics, Strategic Marketing Services, Champions Group and Decathlon.

The reporting time for the event is 5.00 am, followed by theregistration formalities and a fun Zumba session. The 10 kilometres run will be flagged off at 6.00 AM, followed by the 5 Kilometres run flagging off at 6.05 AM and 3 Kilometres run flagging off at 6.10 AM. The event will kick start at thepicturesque Champions Ground on Sarjapur Road.The running track is set amidst a lush green canopy of treesand the recent dip in Bangalore’s temperature is just what was needed for a memorable Womanathon run.

Mr. Subhakar Rao, Chairman, Champions Group said "The event is here to mark the opening of the first ever run for Women, where we are all set to witness men running for women as a mark of celebrating all the women in their lives whether a Mother, Sister, Wife, Friend or Daughter. It is set to inspire thousands of first time runners and veterans to run for a cause and stop violence against women.” What better way to run in protest of the atrocities against women set at the backdrop of the brutal confessions of the prime accused in Nirbhaya’s rape case, openly sharing his views about how women are to be blamed.

HemaMalini, Director, Champions Group said "It is a duty of every responsible citizen to create a safe and positive world for all the women who mould us relentlessly and salute her presence in our lives.The event is a brainchild of Neville J. Bilimoria, a runner, rower and cyclist who has actively been using sporting events such as these to bring in an awareness and raise funds for the deserving and needy. The proceeds of the event will be contributed towards treating ailing women and girls.Let us all, men and women come together this women's day and runin honour of our women and as a gesture of our love, respect and support for them."

About the Venue Partner - Champions Group

Strategic Marketing Services is regarded as the best digital marketing agency globally.They offersuperlative 360 degree marketing, consulting and technology solutions to continually meet the evolving marketing needs by driving tens of millions of customer interactions resulting in hundreds of thousands of buying opportunities across industries each year. Alongsideexpertise in digital marketing they are also actively involved in conducting numerous public events that focus on promoting health and sanitisation, green revolution and gender equality.