The much-awaited adventure sport parasailing is finally in Vijayawada 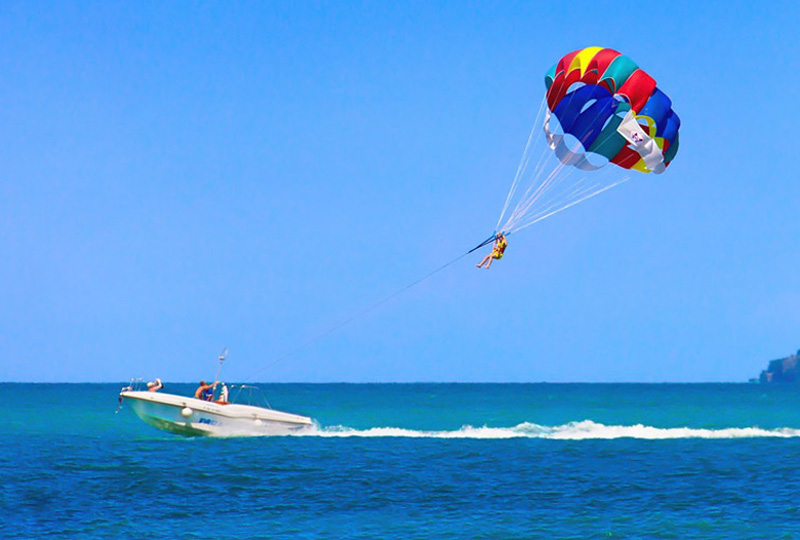 Vijayawada 10/01/2016: Adventure junkies must get ready for a ride in the wind. The much-awaited adventure sport parasailing is finally here.

The exciting activity has rolled out of the stable of Goa-based Champions Yacht Club, which has been given provisional licence to operate water sports in River Krishna near Bhavani Island, prized property of AP Tourism Development Corporation (APTDC).

Adventurous souls gliding through the air, wearing an open parachute while being towed by a motor boat in the river beneath is a common sight in River Krishna.

Also known as parascending or parakiting, the gravity-defying thrill is a recreational activity where a person is towed behind a boat while attached to a specially designed canopy wing that reminds one of a parachute, known as a parasail wing. One or two passengers attached to a parachute fastened to a motorboat cruise in the air as the boat glides on the water.

Over a decade ago in 2003, in what was seen as a classic case of the proverbial slip between the cup and the lip, the APTDC, after much dilly-dallying, introduced parasailing.

Amidst trial runs by the authorities, delirious youngsters started making grand plans of weekend sorties. But the tourism officials’ plan fizzled out even before the activity could take off and the sport was shifted to Visakhapatnam.

The picturesque Bhavani Island resort, the only water lagoon to provide recreation to families, lost its popularity in the recent past due to poor maintenance. But post-bifurcation, the AP Government has shifted focus on grooming this green patch on the river into a sought-after tourist destination.

Additional attractions are being added in a phased manner at the island resort. At the time of the launch of the Tourism Mission, managing director of the Champions Yacht Club Subhakar Rao Surapaneni had announced his plans to launch projects worth Rs. 113 crore in Vijayawada.

The company plans to invest in cruises proposed to be operated from Vijayawada to Amaravati and state-of-the-art floating cottages besides alternate mode of new-age transportation in inland waterways which will create hundreds of jobs.